It’s common to say that platforms aggressively compete with incumbents on value capture in non-digital-native markets. A recent research sheds light on the process by which big tech companies enter regulated markets and the role data play in this entry strategy. How do big tech use data to enter markets?

Over the last ten years, platforms have grown so big they are directly or indirectly controlling a significant chunk of the value of many markets (whether pure digital or influenced by digital). Their market valuation tops the usual suspects of major market capitalisation, they lead entirely new industries (digital advertising and cloud for example), they exert influence on nearly all consumer products markets (through their intermediation position). Recently, this influence has expanded to BtoB industries where we see platforms and big tech companies take positions in newly defined value chains.

A recent research concluded on a four stage process by which platforms enter new markets and highlighted the role data play in the process. Before this, let’s get back to data value forms and the role data plays in platform business model

In our book Datanomics, Simon and I described three main forms of value for data. Commodity when data are bought or sold, either by data brokers or corporations (for example banks or retailers). Lever when data are used to improve the performance of an existing business model (reducing costs or increasing revenue). Asset when companies use the data they collect as one side of their two-sided business model (like social networks or search engines) or when they use them to increase their bargaining power within an industry or a value chain.

We argued that the value as a commodity, though important when you consider the revenues of the data brokers, is much lower compared to the value generated when data is used as a lever or even more as an asset.

In platforms, the three forms of value can be observed. In a previous post I summarized the roles data play in platforms business model and more specifically how platforms use data to increase their advantage on incumbents, other platforms and complementors. Data is the main resource used by platforms to run their service because data are key to ensure liquidity and balance of the two sides of the platforms. Additionally, data is a distinctive resource platforms leverage to have an edge on incumbents through data flywheel effect (the more data, the better the service, the more usage, the more data, …). Last, data is used by platforms to enter other industries and upstream parts of the value chain.

The research by Ozalp and al. describes more precisely this last role data play in platforms, namely how data are used to enter new markets or value chain parts.

The four stages of digital colonization

In their research authors analyze how Google, Amazon, Microsoft, Facebook and Apple entered Education and Healthcare markets and they conclude on a four-stage process they name “digital colonization,”

Additionnaly, they observe that Big Tech firms rarely end up directly offering the “primary service” (e.g., providing school education or becoming primary healthcare providers), however, they change the power dynamics in these industries over time by commoditizing incumbent service providers, turning them into mere complementors . Through this process, Big Tech firms control the data and become unique providers of critical, data-driven value.

The four stages are illustrated in the following graph 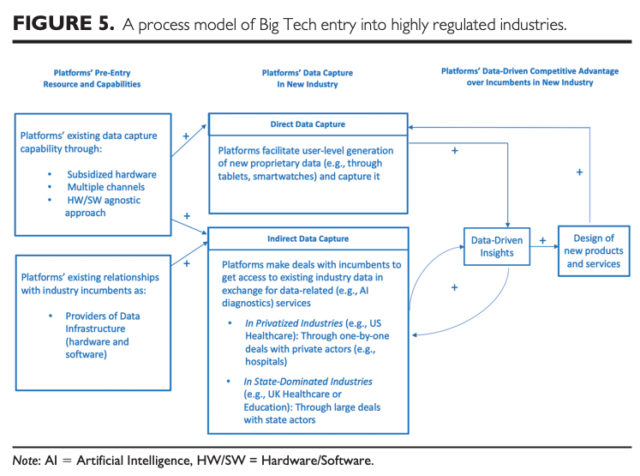 This entry strategy leverages the key capabilities big tech companies master (data, infrastructure, AI, cloud, …) and they use them as a Trojan horse to enter new markets. They first offer their data and technological services on productivity promisses for the incumbents, then as incumbents are progressively using them, the data part of the value proposition becomes more important, turning Big Tech into necessary partners which master distinctive capabilities.

Photo by FLY:D on Unsplash

previous
Data act, what impact on value creation?
next
When industries are data soluble, what are the key strategic questions?

New whitepaper: 9 value creation opportunities with data + how to capture them

Subscribe to our newsletter today to receive updates on the latest news, releases and special offers. We respect your privacy. Your information is safe.

Datanomics and Strategies series #1
test
Subscribe to the newsletter
X